What is being communicated in William Arkle's paintings? Sunny optimism in the long-term

These are strikingly simple, child-like and 'naïve' in style - apparently rather superficially and idealistically happy images in luminous colours... Many other, somewhat similar, examples can be found here:

So, what was Arkle getting-at by painting in this way?

First, we must acknowledge that what he did was deliberate - it was not because he couldn't paint in any other way. An engagement with his work, and knowledge of his biography, makes clear that he was an extremely tough thinker, and a practical man. He had the typical inner strength of a genius - and the confidence of a seer.

Plus - his vision of life was deep and profoundly true (in essence and outline).

So where is the horror and corruption of life? Why did he paint to exclude this - apparently as if he was a sunny optimist who was unaware of anything else?

The answer would seem to be that sunny optimism is the true-est and deepest attitude to life - to any life... in the long-term.

We ought to be simple optimists - but over a large timescale.

And we must not - as Arkle never did in his work - lose sight of the tiny and vital aspects of life. Arkle's paintings combine overall happy optimism in the long term - as often depicted by tranquil cosmic figures hovering over landscapes, or light emerging from things, places people - with little scenes of ordinary human life: people (sometimes tiny people) standing and sitting, holding hands, at work, walking, playing, on holiday, boating, eating and drinking...

Why no horror, pain, corruption? Because in the end is does not matter very much to those who choose to become divine friends of our Heavenly Parents. Sooner or later - but probably later - it is not negated but swallowed-up and put into perspective in the fulfilment and creativity of love. Suffering is subordinated to delight - this is what the pictures show.

What about 'other people'? The universe is set-up such that they are given what they want. But how if they want not to be with us? Well, would we prefer that they were forced?

Yes, but how if those we love are fooled, duped, misled into self-damnation. This is indeed tragedy - but in a universe presided over by a wholly Good creator, we know that this tragedy is expressed mostly in term of delay - not exclusion.

Arkle's paintings tell us that the powers of evil are simply wrong. They are mistaken about teir own power. They have much less power than they suppose - and that mainly to delay, confuse etc. but not to damn.

Their triumphs are fragile - even their own evil self-will is in constant peril of repentance... 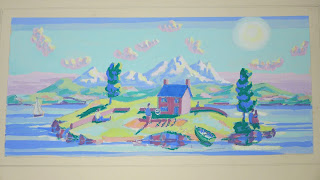 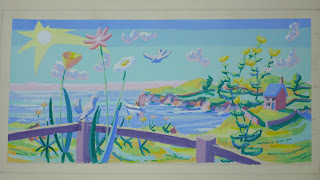 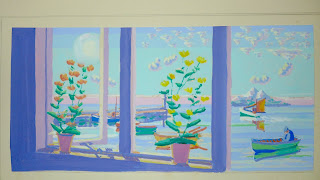 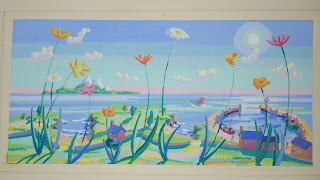 I got these from William Arkle's son Nick's open Facebook pages - I post them here so the images may not be lost to posterity.
Posted by Bruce Charlton at 09:40

Bruce Charlton
Dr Bruce G Charlton. Comments are moderated (pretty severely). Established commenters are privileged, but in general I only publish comments that I judge to contribute to the intended effect of the blog post. Anonymous/ Unknown comments are not published, neither are topical news links. eemale is (decode) bruce dotch arltonatou tlookdotc om...