Some paintings in Arkle's 'naive' style 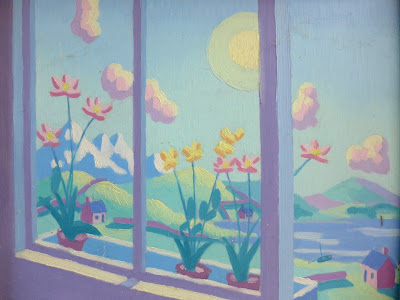 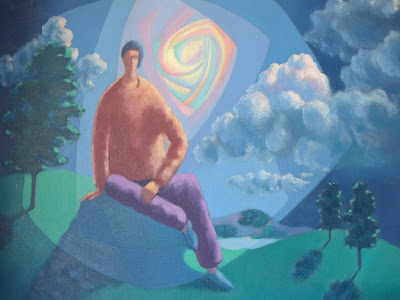 Above are three recently posted examples of William Arkle's paintings from the Facebook pages curated by his son Nick. These are all in what I would broadly call his 'naive' style - characterised by freshness and simplicity. I particularly like the lower landscape with figures; which has a real 'holiday' atmosphere about it - perhaps a holiday as imagined or remembered by a child.

Throughout his life (1925-2000) the spiritual philosopher and artist William Arkle developed and lived by a type of esoteric Christianity which has become one of the great influences on my life. His last published words are therefore of particular interest.

But not only the words. What was special about Arkle is that he lived by his beliefs. Colin Wilson described him as one of the half dozen most remarkable men he had met; precisely because of the harmony between his ideals and his lived consciousness. I have confirmed this by discussions with several people who knew him, including his son Nick.

In some ways Arkle's beliefs were stable from the 1950s through to his death in 2000; and this stability can be seen both in the writings from his first pamphlet (The Hand of God, in 1960) via his two books (A Geography of Consciousness, 1974 and The Great Gift, 1977) to the last writings published on the internet; and by the themes, and recurrent symbolism, of his mature paintings (despite many varieties of style).

In the paintings; as well as sea shores, mountains, skies, rivers and the like; there are specific distinctive subjects - such as teapots and cups, or small boats. But most characteristic is the large smiling divine face - hovering above the picture, implicitly unseen by most people - sometimes with nurturing arms and hands, but most often variations on the theme of of that enigmatically-smiling face.

I regard William Arkle as a genuinely advanced spiritual soul; and therefore it was a fact that he was trying to communicate his vision across a great gulf to reach the rest of us - aspiring perhaps, but ourselves not very far along that path.

This, I think, is the core reason why his paintings and words both tend to strike people (at least initially) as simplistic and naive: too much 'sweetness and light' and too little of that corruption and darkness which modern materialist Man seems to want in his art and literature.

Arkle was perfectly aware of this, but would not compromise on what he saw as the truth about reality. And through his life into old age, his 'vision' became more and more positive, optimistic and serene.

Anyway, in Arkle's 'last words' - published as the Foreword to a large web site made for him by Michael Perry (no longer available); he wrote a characteristic short essay that - as so often - implies a great deal more than seems.

I analyse the whole thing below. My comments are in italics:


I very nearly called this web site 'The Play of William Arkle', and then I felt that it would sound rather too casual for most people and even an insult to the endeavour that is brought to the resolving of the mysteries of life.

The reason that the word 'play' suggested itself is that the journey of understanding seems to lead from the level of human survival as a personality in this world, through to a spiritual view that takes survival of our spiritual self for granted; and then on again into the appreciation of the all-encompassing smile of our Divine Creator.

1. Human survival as a personality in this incarnate, material world.
2.  A 'spiritual' view that takes for granted that the 'soul' survives death, and makes this a solid basis, a metaphysical framework, for living.
3. An interwoven understanding of the 'all encompassing smile' of the divine creator; 'our' creator because we are true children of the divine creator.

In other words; after we cease to push-away knowledge of our own soul, and the pervasive presence of our creator, we can begin to understand the implications and begin to live by them.

This Divine Smile says a very simple thing, which is that the everlasting nature of its Spirit can have only two options: either it remains in its Absolute condition of Blissful non-action; or it can engage in action through the creation of play-grounds. This means creating theatres of time, space and lots of things - from a condition of no action or time or space or things.

The divine smile - in its divinity, and its love for us as men and as individuals - gives us two positive options; plus a negative alternative which Arkle only obliquely implies. What is important is that these two options were the same as confronted the creator. The first in a path of pure 'static' contemplation in a state of bliss. (That is, the state of Nirvana.) The second is the one which God actually took; which is to engage in loving, creative action: creation of The World, of reality - with its time, space, matter and differentiation into many entities including persons.

Our Creator felt that the first choice of 'no action' could becoming boring because there was no adventure, surprise or growth involved. The livingness of The Spirit felt itself to be in need of such adventure as an expression of joyful love and fun. So the second choice came about purely for the exercise of joy and love and fun.

This explains why God made the choice of action and creation. Arkle intuits that it was the preference for change, including unpredictability. This is a statement regarding the deep and intrinsic nature of God as a person. The fact is stated in a typically down-to-earth way ('boring', adventure', 'fun' etc. and 'play' coming up next) that is shocking, or banal, according to taste; and which I regard as expressive of the difficulty of communicating across a spiritual gulf - because there really is no way we can fully understand what is being said unless and until we our-selves attain such an intuitive and direct knowledge of the nature of God, as a real and living person.

The only word I could find to cover the activity of joy and love and fun was the word play, but unless it is approached in the right way the word does not carry the correct significance. And thus the whole of this web site is a journey into the understanding of The Creator's view of the word play.

You will find that my own earlier understandings moved gradually into this way of talking about our reality. It seemed to become more and more light-hearted while being able to sympathise with all the conditions of growth which can feel to be the conditions of fear and anxiety. Thus the big game of life at play has conditions within it which can descend to the very opposites of its initial intention.

God has taken the second option of action and creation; but we - as agent persons - are free to disagree with God's choice. There are two possible ways of disagreeing - the first is to reject personhood and prefer the bliss of Nirvana - to return to the immersive static-state of absorption in which everything began.

But it is the second freedom to which Arkle refers when he mentions 'the opposites of the initial intention'. We are also free to disagree wit the whole scheme of creation and of love between persons. We are thus free to be anti-creation, anti-love: instead of creating in harmony with divine creation we can destroy-creation, and instead of living by love for the divine plan and other persons we can live from-and-for our-selves in fear and resentment of other persons - the state called 'pride'...

When we understand that God's disliked loneliness and boredom and sought 'fun' and 'friends' with whom to share creativity; we may regard this either as generous sharing; or we may regard it as selfish and exploitative of God. The latter inference is what leads to the many of the aspects of the world in opposition to the intention of God.

These opposite conditions are the result of our Creator deciding to give us the Gift of being able to become real players in our own right at this adventure which is being undertaken. This is why the picture book was called The Great Gift and why the writings in it referred to God as being our friend in this one life endeavour. Later on this was changed to the expression God, The Player Friend.

We are 'real players' in the 'adventure' of mortal incarnate living. Within creation, there are those who are free to regard loving creation as wrong, and to work against it. It is part of the plan that those who decide to favour option one (Nirvana) or to oppose option two (to act against love and creation) are allowed to do this, and to 'put their case' to others. For God's hoped-for friends to be real they must positively understand and agree to the divine plan; including that they need to understand and reject the alternatives.

Such a situation is allowed-to work-itself-out in the world for the simple reason that it is the only way that the ultimate aim can be achieved. Nobody is compelled. Indeed, the nature of love and creation is such that nobody can be compelled.

Arkle's concept of 'play' is the experience from-which we may learn; but what we learn is up-to each individual. All options are 'on the table'. The possibilities are known, and competing - even fighting.

We must and will, all of us, take sides - because there is no neutral ground. We may change our minds during mortal incarnate life, and perhaps after - but at any given moment we are on one side, and not on the other two sides. This is the nature and purpose of the play of our lives.

As for me, I have kept the name William Arkle. I like the name because it implies that my Will is doing its best to be a small expression of the Ark of Life, The Heart of the Creator Friend.

However my close associates now find me calling myself Billy The Kid.

Thus Arkle closes his valedictory with a modest and whimsical set of puns...

William Arkle's son Nick has posted some new photos of his artwork online at the Facebook page.

Arkle painted in a variety of style - here is a selection from the new material using his 'mystically-charged-realistic' style: 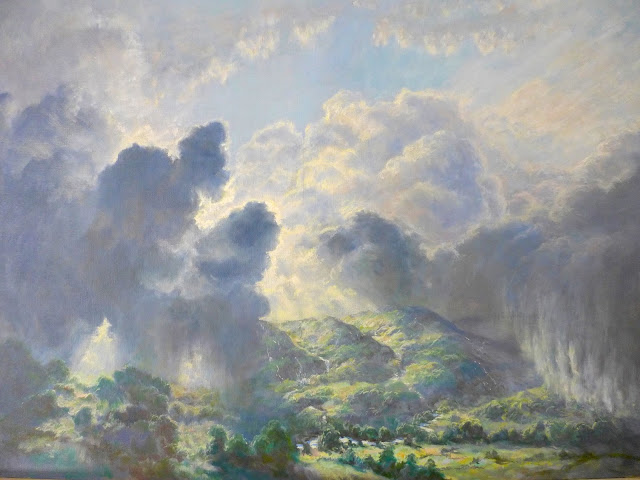 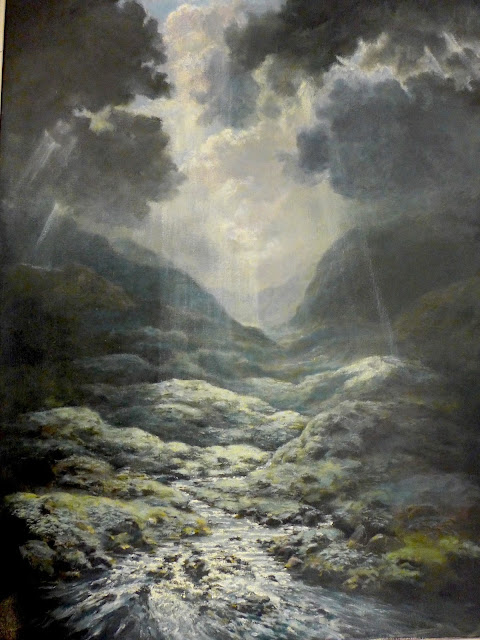 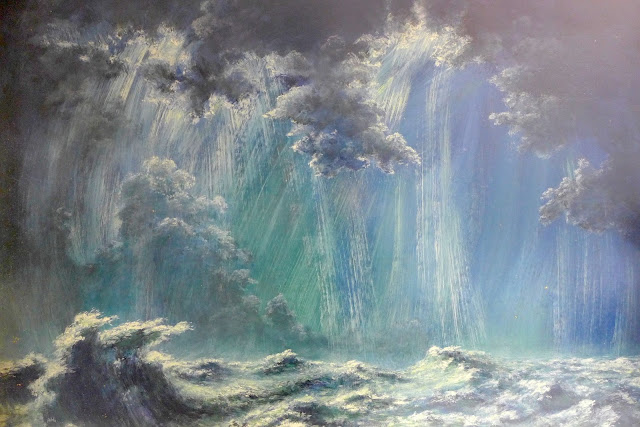 And some in the 'pastel-impressionist' style 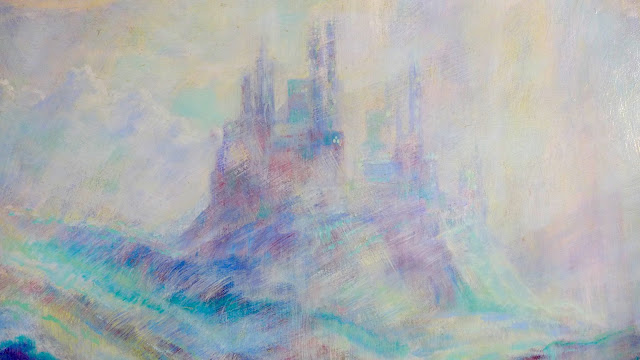 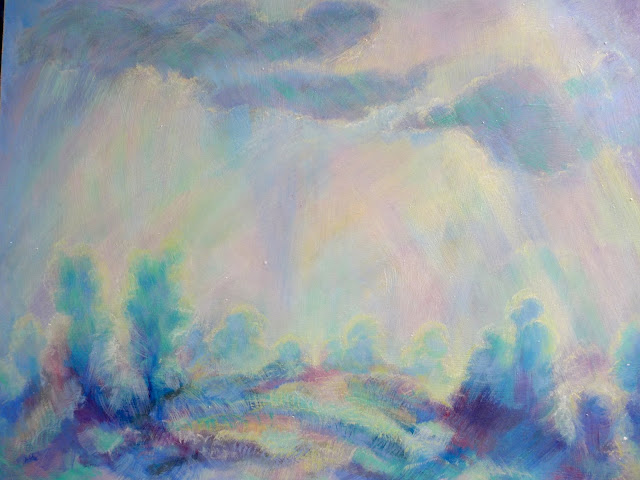 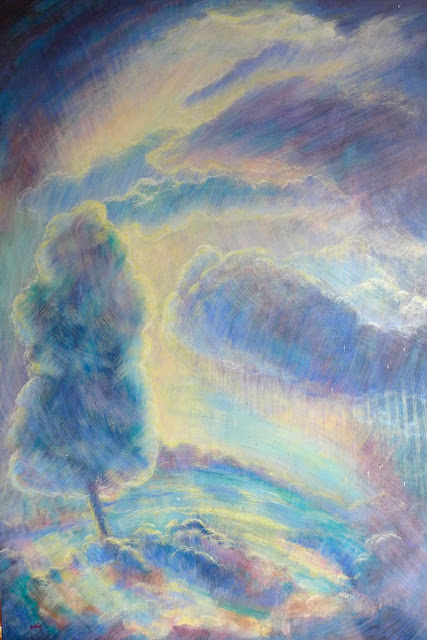 Bruce Charlton
Dr Bruce G Charlton. Comments are moderated (pretty severely). Established commenters are privileged, but in general I only publish comments that I judge to contribute to the intended effect of the blog post. Anonymous/ Unknown comments are not published, neither are topical news links. eemale is (decode) bruce dotch arltonatou tlookdotc om...